Songs From The Original Soundtrack-"Walt Disney's Snow White And The Seven Dwarfs"(Disneyland 1201)-LP. Tracklist Overture/I'm Wishing/One Song With A Smile And A Song Whistle While You Work/Heigh Ho Bluddle-Uddle-Um-Dum A Silly Song Some Day My Prince Will Come Finale Adriana Caselotti (May 6, 1916  January 18, 1997) was an American voice actress and singer. Caselotti was the voice of the title character of the first Walt Disney animated feature Snow White and the Seven Dwarfs, for which she was named as a Disney Legend in 1994, making her the first female voice actor so named. The LP has been autographed on the front cover by Adriana Caselotti with a fountain pen in black........................CONDITION OF VINYL,COVER AND AUTOGRAPH IS VG. 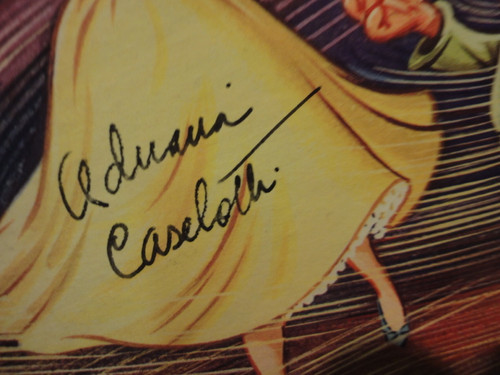