This item is an 8" X 10", color photo of actor Edd Byrnes from the 1960's.Actor Edward Byrnes broke into films around 1957, playing a few bits (he can be seen as one of Jimmy Piersall's buddies in the 1957 biopic Fear Strikes Out) and minor roles. Signed to a Warner Bros. contract, Byrnes connected with the public in the role of a punkish villain in Girl on the Run, the 90-minute pilot episode of 77 Sunset Strip. Audience response to the young actor was so overwhelmingly positive that he was signed as a regular for the Sunset Strip series proper. As hipster parking lot attendant Gerald Lloyd Kookson III, aka "Kookie," he skyrocketed to teen idoldom via the simple expedient of combing his hair at least once per episode. He went on to parlay this schtick into a Top 40 song hit, "Kookie, Kookie, Lend Me Your Comb." During the second season of 77 Sunset Strip, Byrnes followed the example of fellow Warner contractees James Garner and Clint Walker, threatening to quit the series if he wasn't given more money and better scripts. Warners acquiesced to his demands: The studio also improved the social status of Byrnes' character on the series, promoting him to junior detective. After leaving the series in 1963, Byrnes moved to Europe, where he flourished as a star of spaghetti Westerns and espionage flicks. A pop-culture icon by the late '70s, Byrnes made occasional returns to Hollywood in such campy roles as Dick Clark-clone Vince Fontaine in Grease (1978). In addition, Ed Byrnes played "the Emcee" on the 1979 anthology series Sweepstakes, and in 1974, "Kookie" hosted the pilot episode of the evergreen quiz show Wheel of Fortune. The photo has been autographed on the front by Edd "Kookie" Byrnes in black.......BOTH PHOTO AND AUTOGRAPH ARE IN EXCELLENT CONDITION..................... 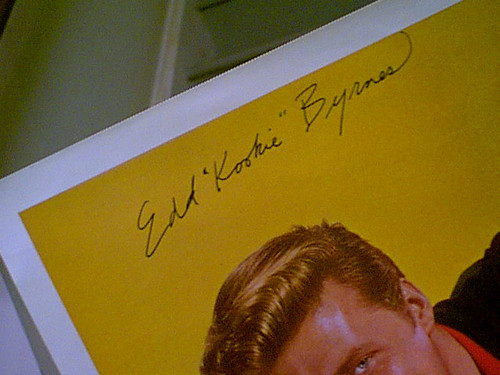