This item is a 10" X 13",black and white lithograph photo of musician David Byrne.David Byrne is a New York-based musician and visual artist who made his name as a rock star, fronting for the avant-garde pop band Talking Heads from 1976 to 1988. Byrne grew up mostly in Baltimore, Maryland and attended the Rhode Island School of Design in Providence. He left art school to pursue a career in music, and in 1974 fellow art students Chris Frantz and Tina Weymouth followed Byrne to New York and they formed Talking Heads, with Frantz on drums, Weymouth on bass and with Byrne singing and playing guitar. They added Jerry Harrison on keyboards and released their first album in 1977. With Talking Heads, Byrne became a well-known pop star, the quirky vocalist and lyricist behind the hit songs "Take Me to the River," "Life During Wartime," "Burning Down the House" and "Road to Nowhere." Outside the band, Byrne recorded My Life in the Bush of Ghosts with Brian Eno (1981) and composed the music for Twyla Tharp's dance piece The Catherine Wheel (1982). He also worked in the Jonathan Demme movies Married to the Mob (1988) and Stop Making Sense (1984, a Talking Heads concert movie), he wrote, directed and starred in True Stories (1986) and he won an Oscar for collaborating on the music for the film The Last Emperor (1988). Since the end of Talking Heads Byrne has been an all-around pop artist elder statesman and promoter (some say appropriator) of world music, especially Cuban and Brazilian. He's done operas, performance art, audio recordings, bike rack designs, TV shows and radio shows. Byrne's solo recordings include The Forest (1991), Feelings (1997) and Grown Backwards (2004), and his collaborations include Everything That Happens Will Happen Today (2008, with Eno) and Here Lies Love (2010, with Fatboy Slim).The lithograph photo has been autographed on the front by David Byrne.................BOTH PHOTO AND AUTOGRAPH ARE IN VERY GOOD CONDITION. 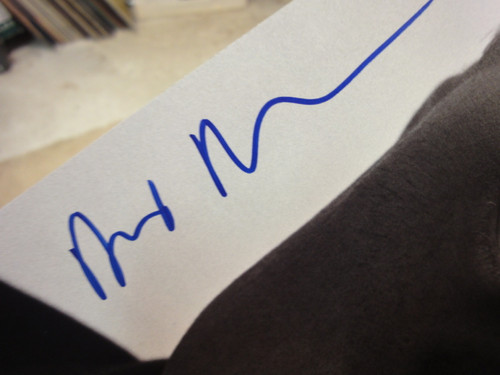