Edgar Rice Burroughs (September 1, 1875 – March 19, 1950) was an American author, best known for his prolific output in the adventure, science fiction, and fantasy genres. Most well-known for creating the characters Tarzan and John Carter, he is also known for writing the Pellucidar series, the Amtor series, and the Caspak trilogy. Burroughs' California ranch is now the center of the Tarzana neighborhood in Los Angeles. Tarzan and the Golden Lion is an adventure novel by American writer Edgar Rice Burroughs, the ninth in his series of twenty-four books about the title character Tarzan. It was first published as a seven part serial in Argosy All-Story Weekly beginning in December 1922; and then as a complete novel by A.C. McClurg & Co. on March 24, 1923. The book has been autographed on the title page Edgar Rice Burroughs with a fountain pen in blue.....CONDITION  OF BOOK AND AUTOGRAPH IS EXCELLENT. JACKET HAS WEAR. 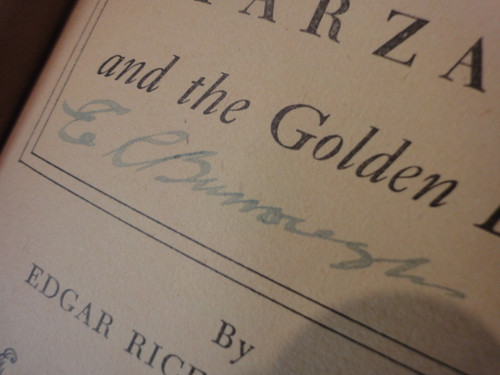