This is an authentically autographed magazine by Raymond Burr.. TV Guide-1968-Photo cover is signed by Raymond Burr, condition of the magazine and autograph is VERY GOOD Raymond William Stacey Burr (May 21, 1917  September 12, 1993) was a Canadian-born actor,[2] primarily known for his title roles in the television dramas Perry Mason and Ironside.[2] His early acting career included roles on Broadway, radio, television and in film,[3] usually as the villain.[4] He won two Emmy Awards[5] for the role of Perry Mason, which he played for nine seasons between 1957 and 1966. His second hit series, Ironside, earned him six Emmy nominations, and two Golden Globe nominations.[5] In addition to acting, Burr owned an orchid business and had begun to grow a vineyard. He was a collector of wines and art, and was fond of cooking.[6] After his death, from cancer, in 1993, Burr's personal life came into question as details of his known biography appeared to be unverifiable.[7][8] Gradually, it was revealed that Burr had possibly contrived a life story that hid his homosexuality.[9] 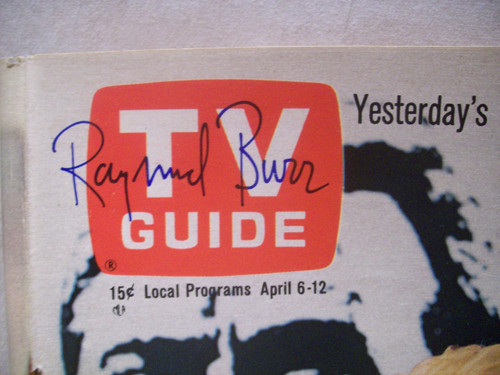