Lloyd M. Bucher-"My Story"-1970-Doubleday-5" X 8"-434 pages-hardcover book-with jacket-with photos-Signed By Author.Commander Lloyd Mark "Pete" Bucher (1 September 1927  28 January 2004) was an officer in the United States Navy, who is best remembered as the Captain of the USS Pueblo (AGER-2), which was captured on January 23, 1968 by the Democratic People's Republic of Korea.In his book, Bucher: My Story, Bucher is extremely critical of his XO, Lieutenant Murphy, whom he portrayed as generally incompetent and an outsider. Bucher also relates conversations with his superiors about limiting the volume of sensitive on-board materials and his attempts to increase shredding capacity and to install scuttle devices (such as thermite bombs) since the ship was not outfitted correctly for its mission. The Navy command at the time estimated "minimal risk" for the Pueblo's mission, since it was to be operating in international waters and its sister ship Banner had previously not been attacked by the North Koreans.The book has been autographed on the title page by Lloyd Bucher with a fountain pen in blue.......................BOTH BOOK AND AUTOGRAPH ARE IN VERY GOOD CONDITION.JACKET HAS WEAR................. 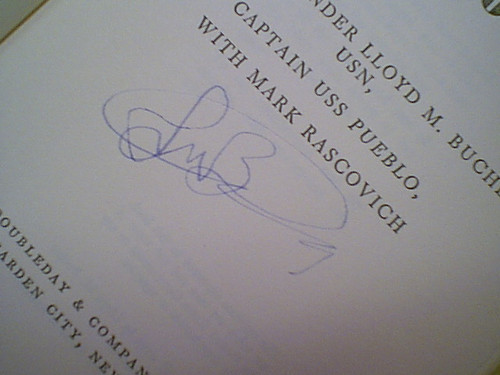