Sports Illustrated Magazine-March 1,1965-68 pages. This vintage sports magazine-which originally sold for thirty five cents-features a color cover photo of Jim Bunning and Bo Belinsky....James Paul David "Jim" Bunning (born October 23, 1931) is an American former Major League Baseball pitcher and politician.During a 17-year baseball career, he pitched from 1955 to 1971, most notably with the Detroit Tigers and the Philadelphia Phillies. When he retired, he had the second-highest total of career strikeouts in Major League history; he is currently 17th. Bunning pitched the seventh perfect game in baseball history on June 21, 1964 against the New York Mets, a feat that has currently been accomplished only twenty times in baseball history. He was inducted into the Baseball Hall of Fame in 1996....Robert "Bo" Belinsky (December 7, 1936  November 23, 2001) was an American left-handed pitcher in Major League Baseball, who became an instant southern California celebrity as a rookie with the original Los Angeles Angels, especially when the fourth of his season-opening four straight wins was a no-hit, no-run game against his former organization, the Baltimore Orioles. Belinsky is one of only two pitchers in Angels franchise history to start his career with a four game winning streak or better. (The other is Jered Weaver).The magazine has been autographed on the front cover by Jim Bunning with a fountain pen in brown and Bo Belinsky with a fountain pen in blue............BOTH MAGAZINE AND AUTOGRAPHS ARE IN VERY GOOD CONDITION. 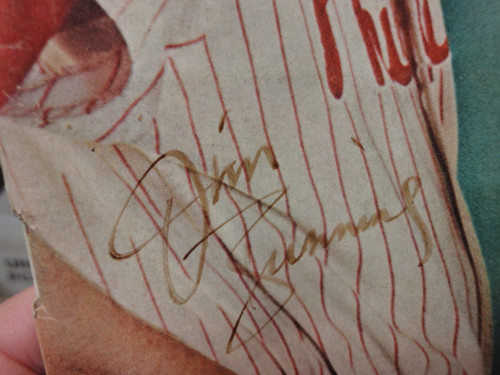