"1992 Republican National Convention"-Houston Texas-"Official Press Guide"-Published August 1, 1992-8" X 12"-71 pages-with photos,bios,maps,schedules-Signed By George Bush.This press guide was distributed to members of the media and was not available to the general public so few of these press guides have been published.George Bush was a former World War II pilot, Texas oil tycoon, Republican congressman, U.N. ambassador and Director of the Central Intelligence Agency before serving as vice president under Ronald Reagan. Promising a "kinder, gentler nation," Bush defeated Michael Dukakis in the 1988 presidential election. In spite of Bush's near-record popularity after military strikes against Panama and a successful war against Iraq, domestic discontent over economic and social issues took their toll, and he lost his bid for re-election in 1992 when he was defeated by Democrat Bill Clinton. Eight years later Bush's son George W. Bush followed Clinton as president after defeating Clinton's vice president, Al Gore, in the elections of 2000. George W. Bush served two full terms and was succeeded by Barack Obama in 2009.The Press Guide has been autographed on the front cover by George Bush...............BOTH PRESS GUIDE AND AUTOGRAPH ARE IN VERY GOOD CONDITION. 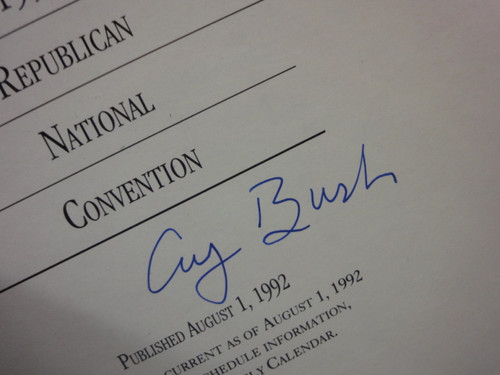