This item is a 4 1/2" X 2" piece cut from a Playbill in the 1960's for the Broadway Musical-"Funny Girl" in which actor Dave Burns starred. A popular star of Broadway musicals, who only made occasional film appearances, he was the original Senex in "A Funny Thing Happened on the Way to the Forum" and Horace Vandergelder in "Hello, Dolly!" Collapsed of a heart attack just after coming offstage during the pre-Broadway tryouts of "70 Girls 70", dying in hospital early the next morning. Received two Tony Awards as Best Supporting or Featured Actor (Musical) for "The Music Man" in 1958 and "A Funny Thing Happened on the Way to the Forum" in 1963. This was followed by a posthumous Tony Award Best Actor (Musical) nomination in 1971 for "Lovely Ladies, Kind Gentlemen", an otherwise unsucessful Broadway musical adaptation of "Teahouse of the August Moon". The item has been autographed and dedicated by veteran actor Dave Burns in blue.................... BOTH AUTOGRAPH AND PAPER ARE IN NICE CONDITION........ 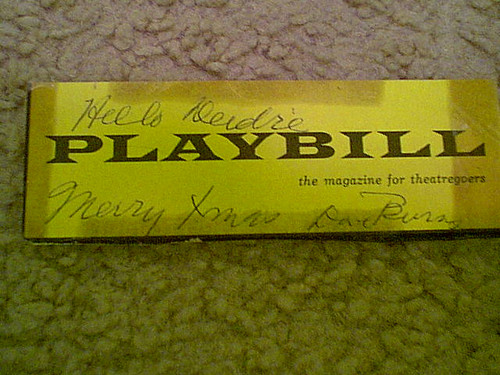