Daws Butler and Don Messick(CSP 13830)-"Alice In Wonderland Starring Magilla Gorilla"-LP.Charles Dawson "Daws" Butler (November 16, 1916May 18, 1988) was a voice actor originally from Toledo, Ohio. He worked mostly for the Hanna-Barbera animation production company and originated the voices of many familiar animated cartoon characters, including Yogi Bear, Quick Draw McGraw, Snagglepuss, and Huckleberry Hound........Donald Earl "Don" Messick (September 7, 1926  October 24, 1997) was an American voice actor best known for his work for Hanna-Barbera. His best remembered vocal creations include Scooby-Doo, Bamm-Bamm Rubble and Hoppy in The Flintstones, Astro the dog in The Jetsons, Muttley the dog in Wacky Races and Dastardly and Muttley in Their Flying Machines, Gears, Ratchet and Scavenger in The Transformers, Papa Smurf in The Smurfs, and Dr. Benton Quest in Jonny Quest. He also did the voice of Snip in the Rankin/Bass 1979 movie Jack Frost. The LP has been autographed on the front cover by Daws Butler and Don Messick....................CONDITION OF VINYL,COVER AND AUTOGRAPHS IS VG. 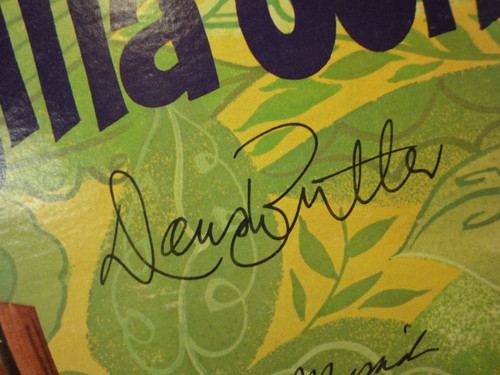