Art Buchwald-"Laid Back In Washington"-1981-G.P. Putnam-New York-6" X 9"-311 pages-Hardcover Book with jacket-Signed By Author.Arthur Buchwald (October 20, 1925  January 17, 2007) was an American humorist best known for his long-running column that he wrote in The Washington Post, which in turn was carried as a syndicated column in many other newspapers. His column focused on political satire and commentary. He received the Pulitzer Prize for Outstanding Commentary in 1982 and in 1986 was elected to the American Academy and Institute of Arts and Letters. Buchwald was also known for the Buchwald v. Paramount lawsuit, which he and partner Alain Bernheim filed against Paramount Pictures in 1988 in a controversy over the Eddie Murphy film Coming to America; Buchwald claimed Paramount had stolen his script treatment. He won, was awarded damages, and then accepted a settlement from Paramount. The case was the subject of a 1992 book, Fatal Subtraction: The Inside Story of Buchwald V. Paramount by Pierce O'Donnell and Dennis McDougal. The book has been autographed on the title page by Art Buchwald in black fountain pen.........BOTH BOOK AND AUTOGRAPH ARE IN VERY GOOD CONDITION.JACKET HAS SOME WEAR................. 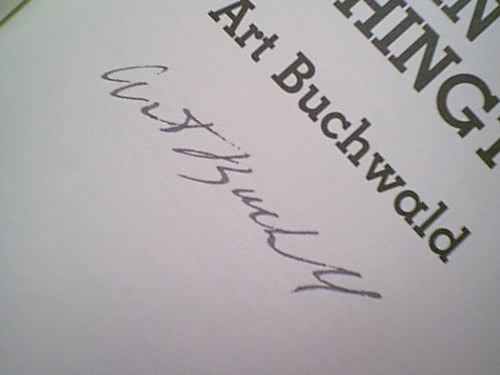