Anthony Burgess-"A Long Trip To Teatime"-1976-Dempsey & Squires-6 1/2" X 9"-119 pages-with twenty-one line drawings by Fulvio Testa-England-Hardcover book-with jacket-Illustrated-Signed By Author.Burgess, Anthony, 191793, English novelist, b. Manchester as John Anthony Burgess Wilson, grad. Manchester Univ., 1940. He taught school in England and in East Asia and pursued an early interest in music. His novels are marked by a surreal, darkly comic imagination. Burgess is acknowledged to have been one of the most imaginative and experimental English prose stylists. Burgess's best-known work is A Clockwork Orange (1962), written in an imaginary teen slang and set in a classless, futuristic society, where an intelligent young hoodlum asserts his individuality by deliberately choosing to do evil. His many other works include the novels Inside Mr. Enderby (1961), MF (1971), Napoleon Symphony: A Novel in Four Movements (1974), Earthly Powers (1980), The Devil's Mode (1989), and the posthumously published A Dead Man in Deptford (1995) and Byrne (1997); as well as a study of James Joyce, Re Joyce (1968).The book has been autographed on the title page by Anthony Burgess.....BOTH BOOK AND AUTOGRAPH ARE IN VERY GOOD CONDITION.JACKET HAS SOME WEAR................. 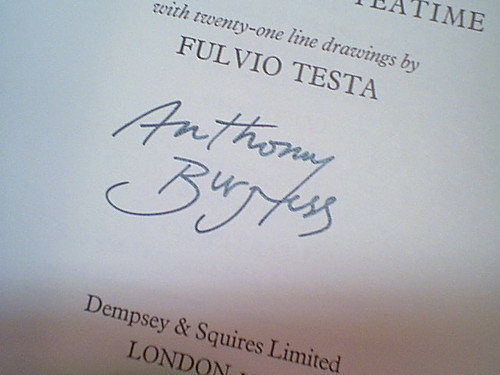