"The King And I"-Vocal Selection-1956-Williamson Music-9" X 12"-32 pages-with photos-Movie Songbook.The King and I is a 1956 musical film made by 20th Century Fox, directed by Walter Lang and produced by Charles Brackett and Darryl F. Zanuck. The screenplay by Ernest Lehman is based on the Richard Rodgers and Oscar Hammerstein II musical The King and I, based in turn on the book Anna and the King of Siam by Margaret Landon. The plot comes from the story written by Anna Leonowens, who became school teacher to the children of King Mongkut of Siam in the early 1860s.The movie starred Yul Brynner. This songbook originally sold for $2.00. The songbook has been autographed on the front cover by Yul Brynner with a fountain pen in blue. The songbook has also been autographed on the front by Rose Pinkston. Ms. Pinkston was Mr. Brynner's Publicist for the film..............BOTH SONGBOOK AND AUTOGRAPH ARE IN VERY GOOD CONDITION. 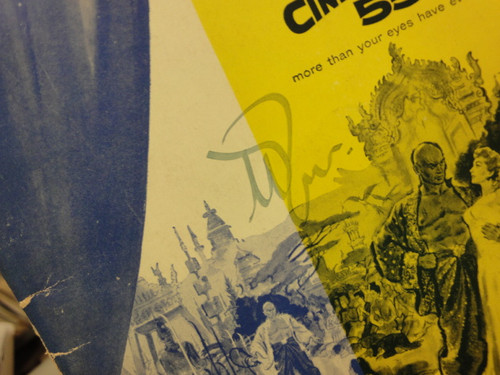