Original Soundtrack-"Return Of The Seven"(UAS 5146)-LP. This LP features the 1966-United Artists Movie-"Return Of The Magnificent Seven". The movie stars Yul Brynner,Robert Fuller,Warren Oates and Claude Akins and they are featured on the front and back covers in original scenes.The first of two sequels to The Magnificent Seven (1960), this bloody western featured only Yul Brynner from the original picture's all-star cast. Once again, the residents of a pastoral Mexican village become enslaved by a maniacal brute, this time the insane rancher Lorca (Emilio Fernandez), who has corralled a small army of 50 gunmen to intimidate the citizenry into building a church in memory of his son. Chico (now played by Julian Mateos), an original member of the seven gunslingers from the first film, hears of the villagers' plight and sends for Chris Adams (Brynner), who rounds up another lucky seven shootists from various places of ill-repute (including prison). The new bunch, which now includes Warren Oates and Claude Akins, storms the storm, intending to restore order. This film was, in turn, followed by a pair of further sequels, Guns of the Magnificent Seven (1969) and The Magnificent Seven Ride! (1972). The LP has been autographed on the front cover by Yul Brynner in black,Claude Akins in green, Warren Oates in black and Robert Fuller in blue....CONDITION OF VINYL,COVER AND AUTOGRAPH IS VG. RECORD IS IN ORIGINAL UNITED ARTISTS INNER SLEEVE.................. 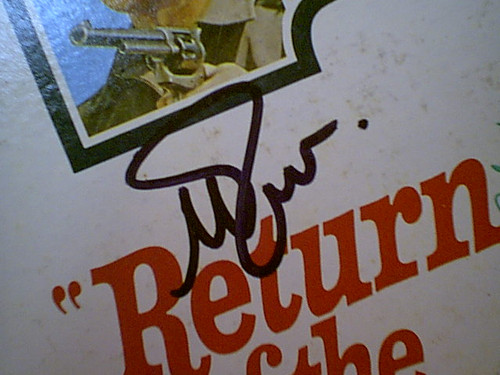