This item is an 8" X 10",black and white photo of Yul Brynner in a scene from the 1959 United Artists Movie-"Solomon & Sheba".Romance, treachery, intrigue and spiritual awakenings abound in the Biblical film adaptation of Solomon and Sheba. Trouble begins between two brothers when poet Solomon (Yul Brynner) is chosen to be next in line to the throne by King David of Israel. His warrior brother Adonijah (George Sanders) is livid when Solomon becomes king. While Israel prospers under Solomon, Sheba (Gina Lollobrigida) conspires with the Egyptians to topple Israel. She is ambitious and seductive and finally gets Solomon to fall in love with her. When a pagan dance ritual turns into an orgy, the people turn against Solomon when the Temple of Jehovah is struck by lightning. After the righteous Solomon has fallen from the grace of God, Sheba renounces her pagan Gods and converts to Judaism. A cast of thousands depict the raging battle between the Israelites and the Egyptians. Directed by King Vidor at the cost of five million dollars, production was delayed when the original choice for the role of Solomon (Tyrone Power) died during the making of the film. Many scenes had to be redone with his replacement, Yul Brynner. The photo has been autographed on the front by Yul Brynner with a fountain pen in brown.............BOTH PHOTO AND AUTOGRAPH ARE IN EXCELLENT CONDITION................ 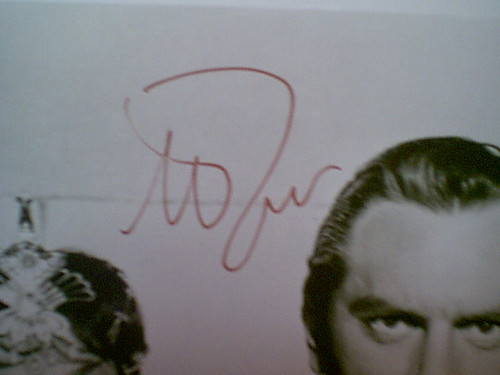