This item is an original 8 1/2" X 11" typed letter from 1986 to his fans signed by Pierce Brosnan.Pierce Brendan Brosnan (born 16 May 1953) is an Irish actor, film producer and environmentalist. After leaving comprehensive school at 16, Brosnan began training in commercial illustration. He then went on to train at the Drama Centre in London for three years. Following a stage acting career he rose to popularity in the television series Remington Steele (198287). After Remington Steele, Brosnan appeared in films such as The Fourth Protocol and Mrs. Doubtfire. In 1995, he became the fifth actor to portray secret agent James Bond in the Eon Productions film series, starring in four films between 1995 and 2002. He also provided his voice and likeness to Bond in the 2004 video game James Bond 007: Everything or Nothing. During this period, he also took the lead in other films such as Dante's Peak and the remake of The Thomas Crown Affair. After leaving the role of Bond, he has starred in such successes as The Matador (nominated for a Golden Globe, 2005), Mamma Mia! (National Movie Award, 2008), and The Ghost Writer (2010).The letter has been signed by Pierce Brosnan...................BOTH LETTER AND AUTOGRAPH ARE IN VERY GOOD CONDITION. 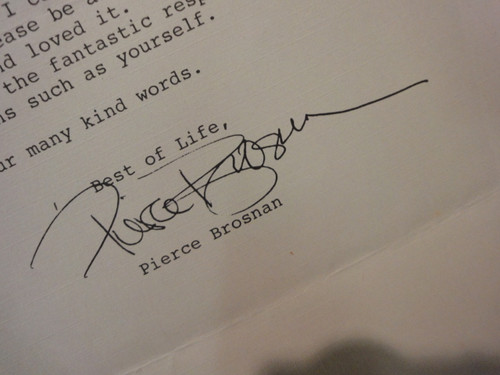