This item is an 8" X 10 1/2" color mounted Time Magazine cover. PLEASE NOTE-this is the cover only. The Time Magazine cover is dated December 4, 1944-Volume XLIV- and features a color cover of General Omar Bradley.Omar Nelson Bradley graduated from the U.S. Military Academy at West Point, New York in 1915, where he later taught mathematics. After years of administrative posts, Bradley was a brigadier general when the United States entered World War II. He commanded forces in North Africa and Sicily, then moved to command the American involvement in the D-Day invasion of 1944, ultimately liberating Paris, France from the German occupied forces. Quiet, polite and popular with enlisted men, Bradley has often been contrasted with his more colorful and blustery colleague, General George S. Patton, Jr. After the war, Bradley served in the Veterans' Administration and as the Chairman of the Joint Chiefs of Staff, retiring in 1953.A hand signed cut signature by Omar Bradley with a fountain pen in black has been affixed to the front. The cut signature portion is approximately 1" X 4"...........BOTH MAGAZINE COVER AND AUTOGRAPH ARE IN VERY GOOD CONDITION. 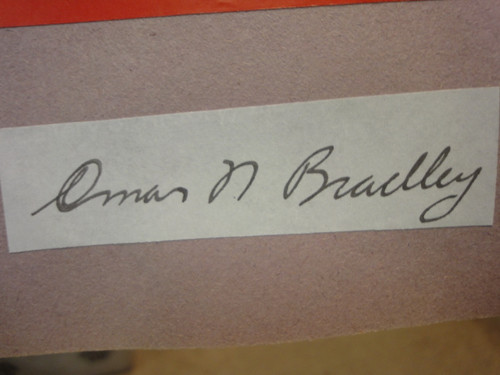