This item is an 8" X 10",black and white photo of actor Lloyd Bridges.Baby boomers know Lloyd Bridges as Mike Nelson, the square-jawed frogman star of the undersea adventure series Sea Hunt. The show ran from 1958-1961 and then continued for years in reruns. Bridges' career was resurrected in a comedic mood when he played a goofy plane dispatcher in the 1980 satire Airplane! and its 1982 sequel Airplane II. He is the father of the actor Beau Bridges and the actor Jeff Bridges, who thanked Lloyd and Dorothy Bridges after winning the Oscar as best actor for the 2009 film Crazy Heart.Lloyd Bridges was briefly blacklisted for political activism during the McCarthy era... In the 1990s he appeared in two more aerial parodies, Hot Shots! (1991) and Hot Shots! Part Deux (1993)... Lloyd Bridges married the former Dorothy Simpson in 1938, and they remained married until his death. Dorothy Simpson died in February of 2009, just weeks before Jeff Bridges won his Oscar... Dorothy and Lloyd Bridges had four children: Beau (b. 1941), Garrett (b. 1948), Jeff (b. 1949), and Lucinda (b. 1953). Garrett died of Sudden Infant Death Syndrome in 1948.The photo has been autographed on the front by Lloyd Bridges...................BOTH PHOTO AND AUTOGRAPH ARE IN VERY GOOD CONDITION. 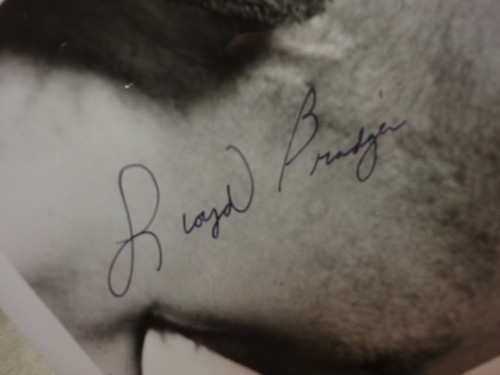