Lenny Bruce Signed Autograph "The Realist" Magazine Cover Photo------------------"The Realist" Magazine-November 1964-No. 54-9" X 11"-23 pages-Signed By Lenny Bruce. This vintage magazine-which originally sold for thirty five cents- features a cover photo of Lenny Bruce plus a 4 page article written by him entitled "The Fecalphiles"........Leonard Alfred Schneider (October 13, 1925  August 3, 1966), better known by his stage name Lenny Bruce, was an American stand-up comedian, social critic, and satirist. He was renowned for his open, freestyle and critical form of comedy which contained satire, politics, religion, sex, and vulgarity. His 1964 conviction in an obscenity trial was followed by a posthumous pardon, the first in the history of New York State, by Governor George Pataki in 2003.Bruce paved the way for counterculture era comedians. His trial for obscenity is seen as a landmark for freedom of speech in the United States. In 2017, Rolling Stone magazine ranked him third (behind disciples Richard Pryor and George Carlin) on its list of the 50 best stand-up comics of all time................................................The Realist was a magazine of "social-political-religious criticism and satire", intended as a hybrid of a grown-ups version of Mad and Lyle Stuart's anti-censorship monthly The Independent. Edited and published by Paul Krassner, and often regarded as a milestone in the American underground or countercultural press of the mid-20th century, it was a nationally-distributed newsstand publication as early as 1958. Publication was discontinued in 2001. The magazine has been autographed on the front cover by Lenny Bruce....................BOTH MAGAZINE AND AUTOGRAPH ARE IN VERY GOOD CONDITION. 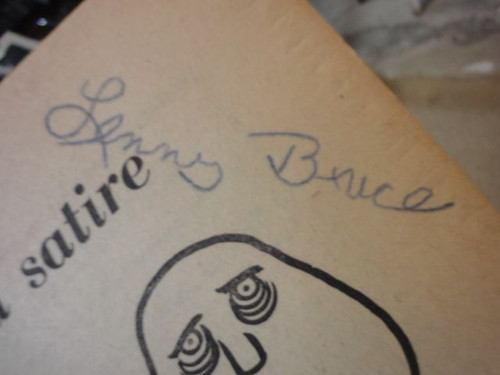