This item is an 8" X 10",black and white photo of Brian Keith in a scene from the 1976 Movie-"Nickelodeon".Peter Bogdanovich's early career as a film writer stood him in good stead for this comedy drama about the early days of the motion-picture industry, based in part on his interviews with pioneering directors Raoul Walsh and Allan Dwan. Leo Harrigan (Ryan O'Neal) is a lawyer and Buck Greenway (Burt Reynolds) is a cowboy and gunman. Both are sent to California to shut down a renegade group of silent-movie makers  financed by blustery H.H. Cobb (Brian Keith)  who are in violation of the Motion Picture Patents Co. Trust. Harrigan and Greenway somehow find themselves working with the movie crew instead of shutting them down; they join forces with cameraman Franklin Frank (John Ritter), leading lady Kathleen Cooke (Jane Hitchcock), and precocious prop girl Alice Forsyte (Tatum O'Neal). Greenway becomes a star and Harrigan a respected director, but both battle over the affections of Cooke. Incidentally, Cobb's big speech near the end is taken almost verbatim from a quote given to Bogdanovich in an interview with actor James Stewart.The photo has been autographed on the front by Brian Keith................BOTH PHOTO AND AUTOGRAPH ARE IN VERY GOOD CONDITION.................. 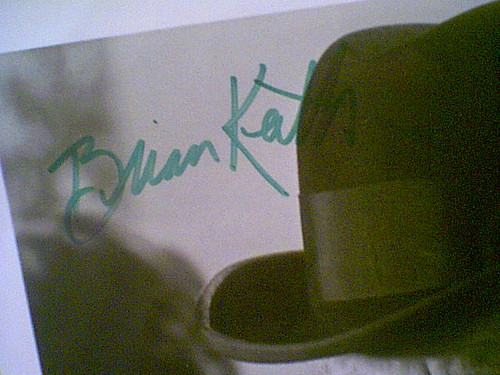