The Browns-"Scarlet Ribbons"-1949-Mills Music- Sheet Music. This vintage sheet music originally sold for seventy five cents. The Browns were an American country and folk music vocal trio best known for their 1959 Grammy-nominated hit, "The Three Bells". The group, composed of Jim Ed Brown and his sisters Maxine and Bonnie, had a close, smooth harmony characteristic of the Nashville sound, though their music also combined elements of folk and pop. They disbanded in 1967 and were elected to the Country Music Hall of Fame in March 2015. The sheet music has been autographed on the front cover by Jim Ed Brown Maxine Brown Bonnie Brown.......BOTH SHEET MUSIC AND AUTOGRAPHS ARE IN VERY GOOD CONDITION. 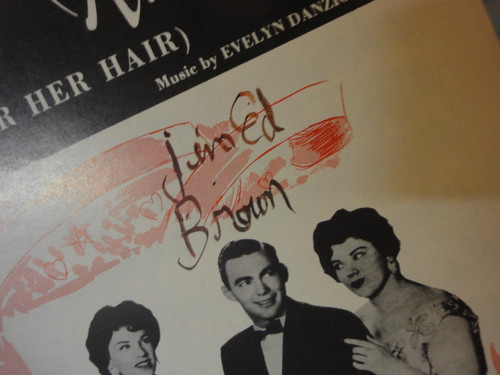