This item is an 8" X 10",black and white photo of Glenn Close and Jeff Bridges in a scene from the 1985 Movie-"Jagged Edge"In this hit thriller, a prosecuting attorney-turned-defense lawyer falls in love with a rich, charming client who's been accused of murdering his wife and her maid with a hunting knife. When an unknown assailant gruesomely slays San Francisco newspaper heiress Paige Forrester (Maria Mayenzet), her husband and business partner, Jack Forrester (Jeff Bridges), turns to corporate attorney Teddy Barnes (Glenn Close) for counsel. Teddy, who quit her job with the district attorney's office four years earlier over an ethical dilemma, has reservations about returning to criminal work; nevertheless, she accepts the assignment, convinced of Jack's innocence and eager to face off in court against her old boss, DA Thomas Krasny (Peter Coyote), who's about run for attorney general. With the help of investigator Sam Ransom (Robert Loggia), the recently divorced Teddy builds a strong defense for her client, though the work  and her incipient romance with Jack  cause strain in her relationship with her children. When Jack's innocence and his romantic intentions come into question, Teddy feels her life slipping back into a moral quagmire until a series of courtroom denouements set the stage for even bigger surprises. Big-name screenwriter Joe Eszterhas' follow-up to Flashdance, Jagged Edge was directed by Richard Marquand, who had previously lensed Return of the Jedi. Parts of Jagged Edge were shot on-location in San Francisco, whose City Hall provides the film's courtroom exteriors.The photo has been autographed on the front by Jeff Bridges and Glenn Close..............BOTH PHOTO AND AUTOGRAPHS ARE IN VERY GOOD CONDITION..................... 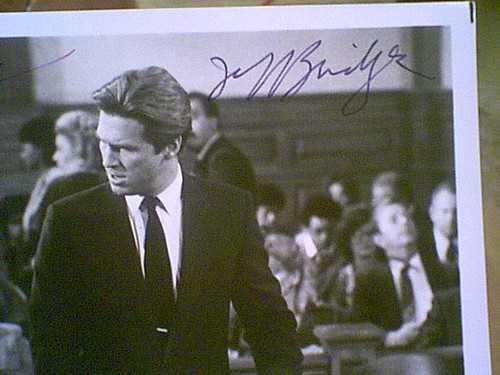