Motion Picture Magazine-April 1970-88 pages. This vintage magazine-which originally sold for fifty cents-features a cover color photo of James Brolin and Robert Young plus articles with photos.Marcus Welby, M.D. is an American medical drama television program that aired on ABC from September 23, 1969, to July 29, 1976. It starred Robert Young as a family practitioner with a kind bedside manner and James Brolin as the younger doctor he often worked with, and was produced by David Victor and David J. O'Connell. The pilot, A Matter of Humanities, had aired as an ABC Movie of the Week on March 26, 1969.The magazine has been autographed on the front cover by James Brolin and Robert Young...............BOTH PHOTO AND AUTOGRAPHS ARE IN VERY GOOD CONDITION. 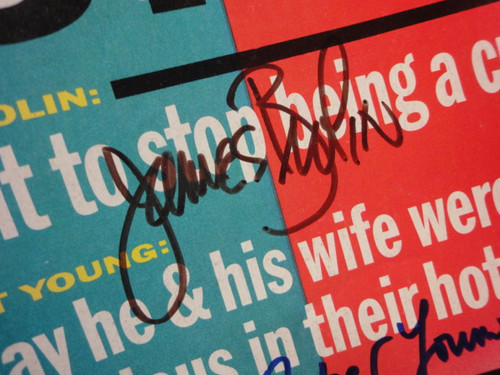