This item is a 3 1/2" X 6 ", black and white fan club photo of actor Eddie Bracken from the 1950's.Comic character actor Eddie Bracken has worked steadily in full-length feature films and on-stage for decades, but was most popular during the '40s when he played leads and co-leads in several sprightly Paramount comedies and light musicals. He typically played shy, twitchy fellows with a constantly cracking voice and a tendency toward cluelessness and helplessness. Bracken began singing and acting on-stage and in vaudeville as a young child. He made his film debut in a quartet of Our Gang shorts and in six episodes of the New York Kiddie Troopers series. Later he began appearing on Broadway and performing in traveling shows. In 1938, Bracken played a bit part in Brother Rat, but did not win his first major role until the 1940 musical comedy Too Many Girls. Bracken is best remembered for his work in a pair of frothy, irreverent Preston Sturges comedies: The Miracle of Morgan's Creek and Hail the Conquering Hero (both 1944). These roles led to his being typecast as a chronically befuddled bumbler. Bracken's popularity continued through the decade, but by the early-'50s, musicals were on the wane and the style of comedy in which Bracken had been hopelessly typecast was out of style. By 1953, he had exchanged his film career for one on stage and television. In 1962, Bracken suddenly showed up in the Italian comedy Always on Sunday. In addition to live-action performances, he also voiced a few cartoon characters, notably in the animated feature Shinbone Alley (1970). In the early '70s, Bracken tried to establish a chain of stock theaters and ended up losing two million dollars. Bracken returned to making occasional film appearances in the early '80s, beginning with a cameo as a theme park owner in National Lampoon's Vacation (1983). He continued to work in films and on-stage through the '90s. The photo has been autographed on the front by Eddie Bracken in blue fountain pen...............BOTH PHOTO AND AUTOGRAPH ARE IN EXCELLENT CONDITION......... 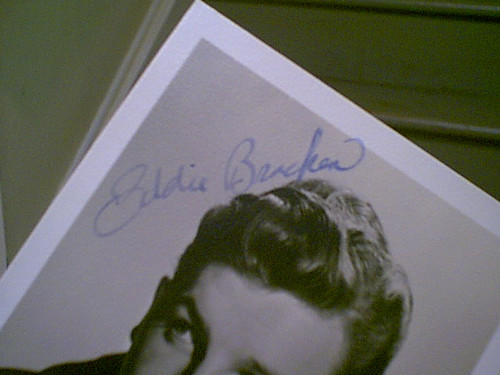