This item is a 4" X 6" color illustration photo of Tuskeegee Airman-George Boyd.George Boyd joined the Civil Air Patrol as a cadet in the New Jersey Wing’s North Bergen County Squadron in 1943. He served as a cadet sergeant and taught new cadets how to drill. He joined the U.S. Army Air Corps on Jan. 20, 1944, and became a Tuskegee Airman. He also served during the Korean and Vietnam wars, became a radar intercept officer and helped protect fuel tanks for bombers in Tule, Greenland, according to the air patrol. He retired from the U.S. Air Force as a major. Boyd rejoined the Civil Air Patrol and served as deputy commander, chief of staff and executive officer before becoming Kansas Wing commander. He served in that position from February 2000 to May 2004. He also helped establish the Kansas State Department of Civil Air Patrol. At the national level, he served as controller, as a member of the National Board and the National Executive Committee, and as Urban Programs adviser. Boyd and his fellow Tuskegee Airmen were honored with a Congressional Gold Medal on March 29, 2007, for their service. He and other World War II members of the Civil Air Patrol received a Congressional Gold Medal on Dec. 10, 2014..................The Tuskegee Airmen were a group of primarily African American military pilots (fighter and bomber) and airmen who fought in World War II. They formed the 332nd Expeditionary Operations Group and the 477th Bombardment Group of the United States Army Air Forces. The name also applies to the navigators, bombardiers, mechanics, instructors, crew chiefs, nurses, cooks and other support personnel.All black military pilots who trained in the United States trained at Griel Field, Kennedy Field, Moton Field, Shorter Field and the Tuskegee Army Air Fields. They were educated at the Tuskegee Institute (now Tuskegee University), located near Tuskegee, Alabama. Of the 922 pilots, five were Haitians from the Haitian Air Force and one pilot was from Trinidad. It also included a Hispanic or Latino airman born in the Dominican Republic.The color illustrated photo has been autographed on the front by George Boyd...............BOTH PHOTO AND AUTOGRAPH ARE IN VERY GOOD CONDITION. 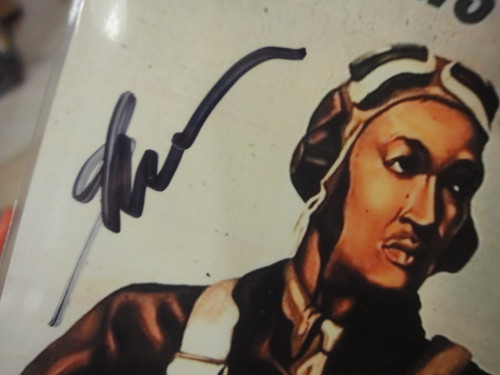