This item is an 8" X 10", black and white photo of actor William Boyd. William Lawrence Boyd (June 5, 1895  September 12, 1972) was an American film actor who is best known for portraying the cowboy hero Hopalong Cassidy. In 1935, Boyd was offered the supporting role of Red Connors in the movie Hop-Along Cassidy, but he asked to be considered for the title role and won it. The original character of Hopalong Cassidy, written by Clarence E. Mulford for pulp magazines, was changed from a hard-drinking, rough-living red-headed wrangler to a cowboy hero who did not smoke, swear, or drink alcohol (his drink of choice being sarsaparilla) and who always let the bad guy start the fight. Although Boyd "never branded a cow or mended a fence, cannot bulldog a steer" and disliked Western music, he became indelibly associated with the Hopalong character and, like the cowboy stars Roy Rogers and Gene Autry, gained lasting fame in the Western film genre. Boyd estimated in 1940 that he had starred in 28 outdoor films in which he fired 30,000 shots and killed at least 100 "varmints". He wore out 12 costumes and 60 ten-gallon hats, rode his horse Topper more than 2000 miles and rode herd on 5000 head of cattle. A score or more of heroines had been saved, but were never kissed. The films were more polished and impressive than the usual low-budget "program westerns". The Hopalong Cassidy adventures usually boasted superior outdoor photography of scenic locations and name supporting players familiar from major Hollywood films. Big-city theaters, which usually wouldn't play Westerns, noticed the high quality of the productions and gave the series more exposure than other cowboy films could hope for. Paramount Pictures released the films through 1941. United Artists produced them from 1943. The photo has been autographed on the front cover by William Boyd with a fountain pen in brown....................BOTH PHOTO AND AUTOGRAPH ARE IN VERY GOOD CONDITION 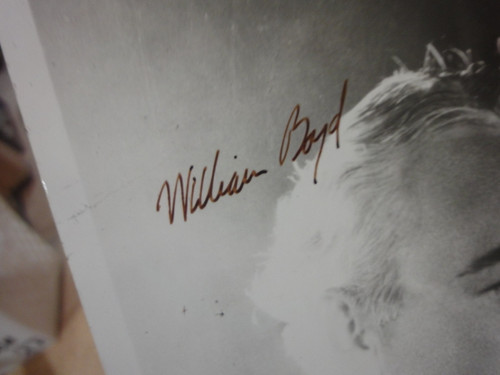