Robert H. Bork "The Tempting Of America The Political Seduction Of The Law" 1990 Book Signed Autograph

Bork, Robert H. "The Tempting Of America The Political Seduction Of The Law" 1990 Book Signed Autograph

Robert H. Bork-"The Tempting Of America The Political Seduction Of The Law"-1990-The Free Press-6" X 9"-432 pages-Hardcover Book-With Jacket-Signed By Author.Bork, Robert Heron, 1927, American jurist, b. Pittsburgh. He received his law degree from the Univ. of Chicago in 1953, and served as professor of law at Yale Univ. (196273, 197781), U.S. Solicitor General (197377; see Watergate affair.), and judge for federal Circuit Court of Appeals for the District of Columbia (198288). In 1987, President Ronald Reagan nominated Bork to the U.S. Supreme Court. An outspoken conservative, Bork was widely reviled for his apparent opposition to advancement in civil liberties. After lengthy and acrimonious confirmation hearings, he was ultimately voted down by the Senate, 5842. Bork resigned from the federal court in Feb., 1988, and became a resident scholar at the American Enterprise Institute. The book has been autographed on the title page by Robert Bork............BOTH BOOK AND AUTOGRAPH ARE IN VERY GOOD CONDITION......... 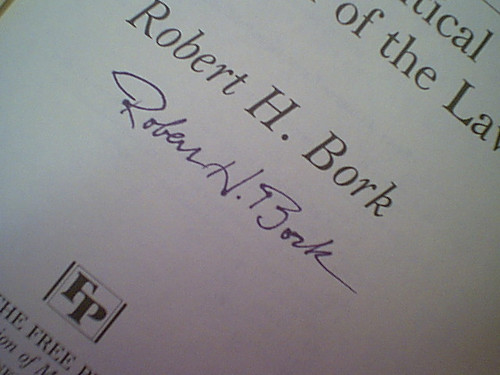 Bork, Robert H. "The Tempting Of America The Political Seduction Of The Law" 1990 Book Signed Autograph