This item is an 8" X 10", black and white photo of actor Richard Boone in a scene from the popular television series-"Have Gun Will Travel". Richard Allen Boone (June 18, 1917 – January 10, 1981) was an American actor who starred in over 50 films and was notable for his roles in Westerns, including his starring role in the television series Have Gun – Will Travel. Boone's television series, Have Gun – Will Travel, made him a national star because of his role as Paladin, the intelligent and sophisticated, but tough, gun-for-hire in the late 19th-century American West. The show had first been offered to actor Randolph Scott, who turned it down and gave the script to Boone while they were making the film Ten Wanted Men. The show ran from 1957–63, with Boone receiving two more Emmy nominations, in 1959 and 1960. During the show's run, Boone starred in the film I Bury the Living (1958) and appeared on Broadway in 1959, starring as Abraham Lincoln in “The Rivalry" which ran for 81 performancesHe occasionally did other acting appearances such as episodes of Playhouse 90 and The United States Steel Hour and TV movie The Right Man (1960). He had a cameo as Sam Houston in The Alamo (1960), a starring role in A Thunder of Drums (1961) and narrated a TV version of John Brown's Body.Boone was an occasional guest panelist and also a mystery guest on What's My Line?, the Sunday night CBS-TV quiz show. On that show, he talked with host John Charles Daly about their days working together on the TV show The Front Page. The photo has been autographed on the front by Richard Boone..................BOTH PHOTO AND AUTOGRAPH ARE IN VERY GOOD CONDITION. 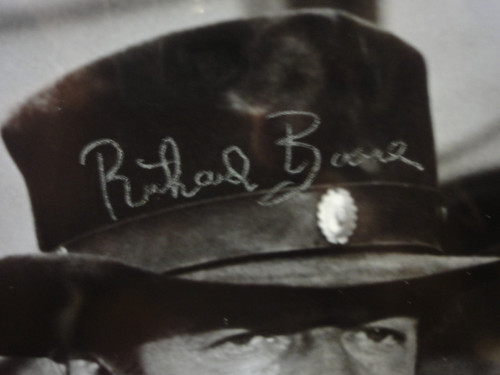