THIS IS AN AUTHENTICALLY AUTOGRAPHED PHOTO BY JOSEPH BOLOGNA AND SUZANNE PLESHETTE... THIS IS A 8 INCH BY 10 INCH BLACK AND WHITE PHOTO SIGNED BY JOSEPH BOLOGNA AND SUZANNE PLESHETTE. HAS ORIGINAL TYPED AND DATED BYLINE. CONDITION OF THE PHOTO AND AUTOGRAPHS IS VERY GOOD. Bologna was born in Brooklyn, New York. He is of Italian descent and was raised Roman Catholic. The actor has a long history in film and television. His breakthrough film, Lovers and Other Strangers, written with his wife Renée Taylor, was based on the true-life circumstances of organizing a wedding on short notice with the involvement of his Italian extended family and Renee's Jewish clan. Several relatives performed as extras in the final cut. A year later, in 1971, the couple again collaborated to write and perform in the movie Made for Each Other. Bologna stayed close with his old-neighborhood aunts and uncles after becoming successful. Two of them were slightly famous on their own: his Uncle Pat was "Blacky the Bootblack", whom Joseph Kennedy credited as his main influence when he sold all of his stock holdings in the summer of 1929 (the market crashed in October) and his aunt Pauline was one of the best-known chefs to the stars, working for Jackie Gleason, Burt Reynolds and many other luminaries. A decade later, Bologna's aunt Pauline chastised him for starring in the nudity-filled Blame it on Rio co-starring Michael Caine. Bologna replied, "Blame it on me, it's the last time I invite Aunt Pauline to a film premiere." Bologna's other best-known film role is that of temperamental 1950s television star Stan "King" Kaiser in the 1982 comedy hit My Favorite Year, starring Peter O'Toole. He is married to the actress Renee Taylor, with whom he has a son, Gabriel Bologna. Taylor and Bologna have also co-starred on stage and on TV. Bologna played a love interest for his real-life wife in the "Maternal Affairs" episode of the CBS sitcom The Nanny, in which Taylor plays Syliva, the already-married mother of Fran Drescher's character. Suzanne Pleshette (January 31, 1937  January 19, 2008)[1][2][3] was an American actress, on stage, screen and television, known for her role of Emily Hartley on The Bob Newhart Show in the 1970s, and for prior roles in several major films which included the Alfred Hitchcock movie The Birds and Rome Adventure, as well as in Broadway plays. 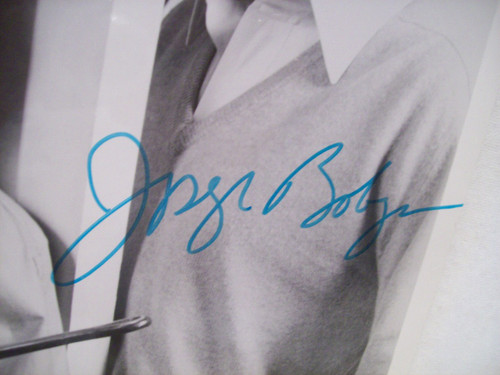