This item is a set of 8-8" X 10",black and white photos of actor Joe Bologna in scenes from the 1973 Movie-"Cops & Robbers".In this comedy from director Aram Avakian, New York police officers Cliff Gorman and Joe Bologna turn crooked. Their plan is to steal $10 million worth of investment certificates, using a Manhattan parade as their "cover". Gorman and Bologna display an amazing degree of dexterity and foresightedness in breaking down the investment firm's sophisticated security system. Too bad they didn't take fate into consideration. Cops and Robbers was based on a novel by Donald Westlake (The Hot Rock).One photo has been autographed by Joe Bologna on the front...........BOTH PHOTOS AND AUTOGRAPH ARE IN EXCELLENT CONDITION................................ 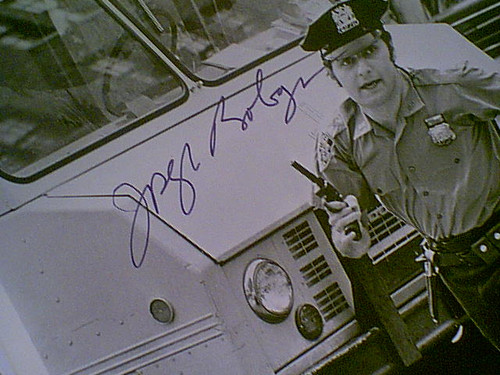