"I Can't Believe That You're In Love With Me"-1954-Mills Music-sheet music. This song is the theme to the 1954 Movie-"The Caine Mutiny" starring Humphrey Bogart, Jose Ferrer, Van Johnson and Fred MacMurray. They are featured on the front cover of the sheet music in vintage scenes.Robert Francis is at the center of the story as Willis Keith, a newly-minted ensign assigned to the destroyer/minesweeper U.S.S. Caine during World War II. Soon after his arrival, the ship gets a new captain, Lt. Comdr. Philip Francis Queeg Humphrey Bogart, a tough, no-nonsense veteran officer who tries to turns the crew into proper sailors and the Caine into a tight ship, engendering resentment from some of the men and several of his officers. A veteran of difficult years of service for too long, Queeg has insecurities about himself, his command, and his career that begin to manifest themselves as spells of temper over small details that cause him to make mistakes. Lt.Keefer (Fred MacMurray), the glib-tongued communications officer, begins making suggestions to the ship's sincere but overburdened first officer, Lt. Steve Maryk (Van Johnson), that Queeg may have mental problems. Maryk initially rejects these suggestions, and tries to support the captain, but conditions deteriorate to the point where Maryk is forced to relieve Queeg of command, and is charged -- along with Keith, who supported him -- with mutiny. Enter Lt. Barney Greenwald (Jose Ferrer), a lawyer in civilian life, who reluctantly agrees to help them, mostly out of sympathy for the impossible predicament in which Maryk has found himself trapped. The sheet music has been autographed on the front cover by Humphrey Bogart with a fountain pen in black,Jose Ferrer with a fountain pen in black,Van Johnson with a fountain pen in blue and Fred MacMurray with a fountain pen in black. The front of the sheet music has also been autographed by Don Baker. Mr. Baker was the press agent for Stanley Kramer Prductions...............BOTH SHEET MUSIC AND AUTOGRAPHS ARE IN VERY GOOD CONDITION................... 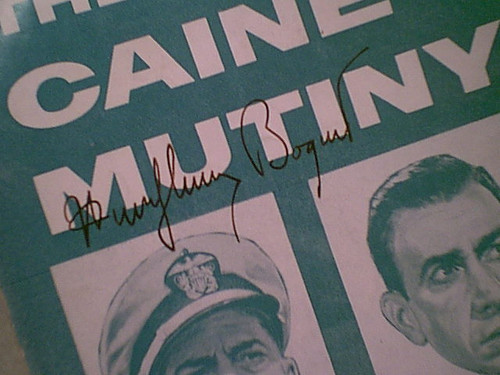