This item is an 8" X 11",color photo of actor David Boreanaz.The color lithograph photo is mounted on a piece of 8" X 11" photography cardboard.David Paul Boreanaz (born May 16, 1969) is an American film and television actor. He is perhaps best known for his role on the television series Buffy the Vampire Slayer and Angel, as the character Angel. Since fall of 2005, he has played the male lead, Seeley Booth, on Bones, opposite Emily Deschanel.Boreanaz's first acting appearance was a guest spot on the hit American sitcom, Married... with Children, as Kelly's biker boyfriend. He was cast in the television series Buffy the Vampire Slayer, after being spotted by a producer while walking his dog. In the cult series, he played the mysterious Angel, a vampire with a soul. The show became enormously successful and Boreanaz starred in a spin-off series, Angel, which gave the character a chance to evolve and concentrated on Angel's battle for redemption. He appeared on Buffy from 1997 to 1999, at which point he began starring in Angel, which ran until 2004. Boreanaz's only starring role in a major theatrical film was in 2001's slasher horror film, Valentine, alongside Denise Richards and Katherine Heigl. In 2003, he appeared in the music video for singer Dido's "White Flag", and was the voice of Leon (aka Squall Leonhart) in the video game Kingdom Hearts, but he did not reprise his role in the sequel. In 2005, Boreanaz began starring opposite Emily Deschanel on the current prime time television series, Bones. He most recently appeared in These Girls, a Canadian film in which he played a biker; the film received a limited theatrical release in Canada in March 2006, after premiering at the Toronto Film Festival and the Vancouver International Film Festival. His upcoming roles include parts in the independent films Mr. Fix it and Suffering Man's Charity. In that same year, he also voiced Hal Jordan in the direct to video DC Comics animated feature Justice League: The New Frontier. In the season 3 finale of his TV series "Bones", Booth is seen in his bathtub reading an issue of Green Lantern, the character he voiced in the Justice League: The New Frontier movie.The photo has been autographed on the front by David Boreanaz.........BOTH PHOTO AND AUTOGRAPH ARE IN EXCELLENT CONDITION................ 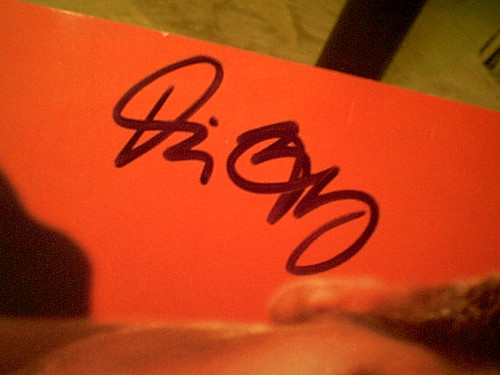