Playbill for The Brooks Atkinson Theatre-1963-"Man And Boy"-6" X 9"-32 pages-theatre program starring Charles Boyer.Man and Boy is a play by Terence Rattigan.It was first performed at The Queen's Theatre, London, and Brooks Atkinson Theatre, New York, in 1963 starring Charles Boyer. It was revived in 2005 at the Duchess Theatre, London, with David Suchet as the lead part, Gregor Antonescu, to great acclaim.The Australian premiere of Man and Boy was performed at the Garrick Theatre in Perth, Western Australia in June 2007.The play is a study of a ruthless, sociopathic businessman: his inability to love and the impact of this on others (notably, his son and his wife). The central character Gregor Antonescu was based on the lives of Ivar Kreuger, the Swedish Match King and Samuel Insull the Anglo-American investor.The Playbill has been autographed on the front cover by Charles Boyer with a fountain pen in blue..................BOTH PLAYBILL AND AUTOGRAPH ARE IN VERY GOOD CONDITION............. 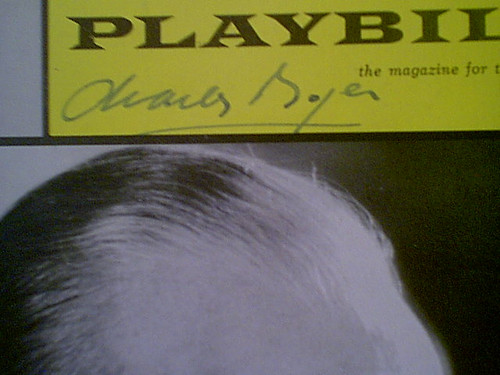