This item is an 8 1/2" X 10 1/2",black and white lithograph photo of actor Charles Boyer in a scene from one of his famous movies. The lithograph photo has been mounted on an 8 1/2" X 10 1/2" piece of construction paper.With his passionate, deep-set eyes, classical features, and ultra-suave manner, it is small wonder that French actor Charles Boyer was known as one of the great cinematic lovers. During the 20s, Boyer made a few nondescript silent films but was primarily a theatrical actor. From 1929-31 he made an unsuccessful attempt to make it in Hollywood before returning to Europe until 1934 when his films began to win public favor. He became a true star with Garden of Allah (1936), and went on to play opposite the most alluring actresses of the 30s and 40s, including Dorothy Lamarr, Ingrid Bergman, and Greta Garbo. During World War II he became active in encouraging French-American relations and established the French Research Foundation, for which he was awarded a special Academy Award in 1942 for "progressive cultural achievement" (he was nominated as an actor four times but never won). Later Boyer became an American citizen and went on to play more mature roles, including the occasional stage appearance (notably in Shaw's Don Juan in Hell). With actors Dick Powell and David Niven, Boyer co-founded Four Star Television in 1951, starring in many of the company's TV productions during the 50s and 60s. His career tapered off after the suicide of his 21-year-old son in 1965, after which he mostly made European films, though he returned to America to appear as the ancient High Lama in the musical remake of Lost Horizon (1973). He won the New York Film Critics Circle Award for his work in Stavisky, his final performance.The lithograph photo has been autographed on the front by Charles Boyer...............BOTH LITHOGRAPH PHOTO AND AUTOGRAPH ARE IN EXCELLENT CONDITION......... 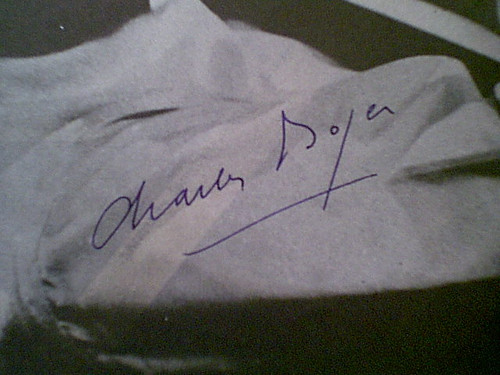