This item is an 8" X 10", black and white photo of Karen Black and Charlton Heston in a scene from the movie-"Airport 1975".In the wake of the 45-million-dollar gross of the original Airport (1970), Universal was all but required by an act of Congress to produce Airport '75. Charlton Heston heads the all-star cast as Alan Murdock, the former test pilot who must keep a disabled 747 from crashing in flames. The crisis begins when a businessman (Dana Andrews), flying his small private plane, suffers a fatal heart attack and the plane smashes into the cockpit of the 747. Following Murdock's radioed instructions, stewardess Nancy Pryor (Karen Black) takes over the controls. The special-guest passenger lineup includes Helen Reddy as a singing nun (a character wickedly satirized in the 1980 parody Airplane!), Myrna Loy as an alcoholic, and Sid Caesar as a garrulous passenger. While Airport '75 yielded only 25 million dollars at the box office, the franchise continued, spawning Airport '77 a few years later and Airport '79 two years after that. The photo has been autographed on the front by Karen Black and Charlton Heston...BOTH PHOTO AND AUTOGRAPH ARE IN VERY GOOD CONDITION........ 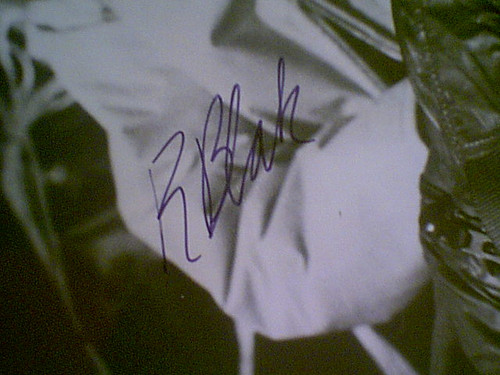