Blondell, Joan and Dick Powell "Gold Diggers Of 1937" Sheet Music 1936 Signed Autograph "With Plenty Of Money And You" Cover Photos

"With Plenty Of Money And You"-1936-Harms-sheet music.Gold Diggers of 1937 is a 1936 Warner Bros. movie musical directed by Lloyd Bacon with musical numbers created and directed by Busby Berkeley, and starring Dick Powell and Joan Blondell, who were married at the time, and Victor Moore. The film features songs by the teams of Harold Arlen and E.Y. Harburg and Harry Warren and Al Dubin, and was based on the play Sweet Mystery of Life by Richard Maibaum, Michael Wallach and George Haight, which ran very briefly on Broadway in 1935. Warren Duff wrote the screenplay, apparently with the assistance of Tom Warren, who's billed as "Screenplay constructor". Gold Diggers of 1937 was the fourth in Warner Bros.' series of "Gold Digger" films, following Gold Diggers of Broadway (1929), which is now lost, Gold Diggers of 1933, which was a remake of the earlier film, and the first to feature Busby Berkeley's extravagant production numbers, and Gold Diggers of 1935.It was followed by Gold Diggers in Paris (1938).The sheet music has been autographed on the front cover by Joan Blondell with a fountain pen in blue and Dick Powell with a fountain pen in black...............BOTH SHEET MUSIC AND AUTOGRAPHS ARE IN VERY GOOD CONDITION. 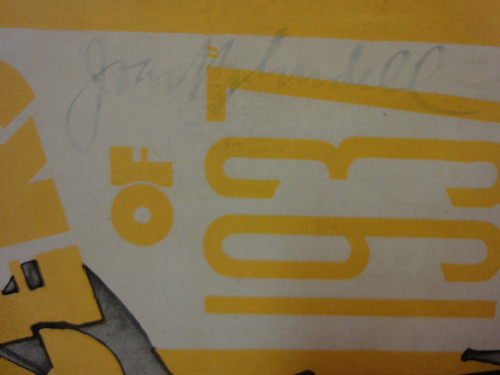 Blondell, Joan and Dick Powell "Gold Diggers Of 1937" Sheet Music 1936 Signed Autograph "With Plenty Of Money And You" Cover Photos