Don Bluth-"Dragon's Lair"-Volume 1-Issue 1-August 2003-First Printing-Color Comic Book. This comic book originally sold for $2.95. Donald Virgil Bluth ( born September 13, 1937) is an American animator, film director, production designer, video game designer and animation instructor, known for his animated films, including The Secret of NIMH (1982), An American Tail (1986), The Land Before Time (1988), All Dogs Go to Heaven (1989) and Anastasia (1997), for his involvement in the LaserDisc game Dragon's Lair (1983), and for competing with former employer Walt Disney Productions during the years leading up to the films that became the Disney Renaissance. He is the older brother of illustrator Toby Bluth. In 1983, he, Rick Dyer, Goldman, and Pomeroy started the Bluth Group and created the groundbreaking arcade game Dragon's Lair, which let the player control an animated-cartoon character on screen (whose adventures were played off a LaserDisc). This was followed in 1984 by Space Ace, a science-fiction game based on the same technology, but which gave the player a choice of different routes to take through the story. Bluth not only created the animation for Space Ace, but he also supplied the voice of the villain, Borf. Work on a Dragon's Lair sequel was underway when the video arcade business crashed. Bluth's studio was left without a source of income and the Bluth Group filed for bankruptcy on March 1, 1985. A sequel called Dragon's Lair II: Time Warp was made in 1991, but it was rarely seen in arcades. The comic book has been autographed on the front page by Don Bluth..................BOTH COMIC BOOK AND AUTOGRAPH ARE IN VERY GOOD CONDITION. 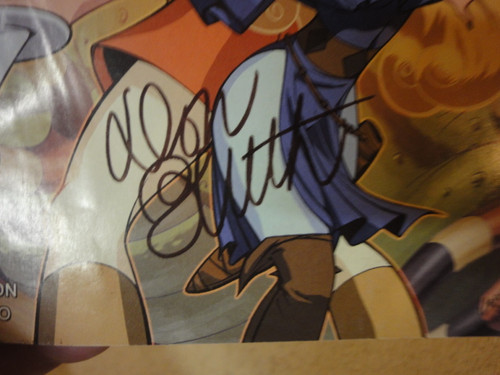