Bikel, Theodore LP Signed Autograph The Poetry And The Prophecy Of The Old Testament

THIS IS AN AUTHENTICALLY AUTOGRAPHED LP BY THEODORE BIKEL.. THEODORE BIKEL(ELEKTRA EKL 220)THE POETRY AND PROPHECY OF THE OLD TESTAMENT. LP HAS ORIGINAL INNER SLEEVE. LP HAS GATEFOLD COVER WITH BOOKLET.PHOTO COVER IS SIGNED BY THEODORE BIKEL. TRACKS:CREATION, EXPULSION FROM PARADISE, LAMENTATION OF JEREMIAH BY THE RIVERS OF BABYLON, THE VISION OF ISAIH, THE SONG OF SONGS, PSALMS 98 AND 150-CONDITION OF THE VINYL,COVER, AND AUTOGRAPH IS VG PLUS. Theodor Meir Bikel (born May 2, 1924, Vienna, Austria) is an Academy Award- and Tony Award-nominated character actor, folk singer and musician. He made his film debut in The African Queen (1951) and was nominated for an Academy award for his role as the Southern Sheriff in The Defiant Ones (1958). Bikel started acting as a teenager in Palestine, and began a small theater there before moving to London to attend the Royal Academy of Dramatic Art. After several plays and films in Europe, he moved to the United States in 1954. He was the U-boat first officer to Curt Jürgens in The Enemy Below (1957) and played the captain of the Russian submarine in The Russians Are Coming, the Russians Are Coming (1966). 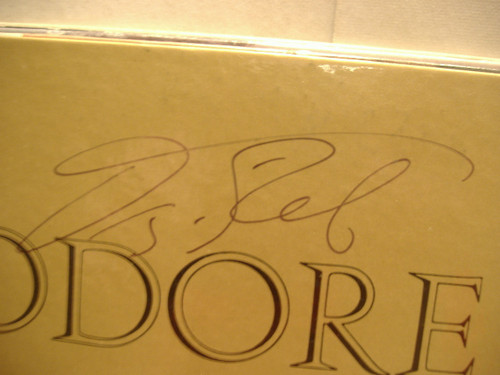 Bikel, Theodore LP Signed Autograph The Poetry And The Prophecy Of The Old Testament