This item is a 9 1/2" X 12",black and white lithograph photo of actor Warren Beatty.Warren Beatty began as a standard young heartthrob, making a splash opposite Natalie Wood in 1961's Splendor in the Grass. But he morphed into something more complicated, playing handsome antiheroes in complex movies like Bonnie and Clyde (1967, with Faye Dunaway), McCabe and Mrs. Miller (1971, also with Keith Carradine), and Shampoo (1975). He began writing and directing, and won an Academy Award for directing Reds, a sprawling 1981 movie about the Russian Revolution (co-starring Diane Keaton and Jack Nicholson). Beatty also earned a reputation as an off-screen heartbreaker, dating a long string of leading ladies, including Madonna, with whom he candidly appears in Truth or Dare (1991). In 1991 Beatty married actress Annette Bening, his co-star in the gangster movie Bugsy (1991, co-starring Ben Kingsley). His 1998 movie Bulworth (co-starring Halle Berry and Don Cheadle) was a political satire that seemed to echo Beatty's outspoken political views, opinions he was later to voice during a brief flirtation with a run for president in 2000.The lithograph photo has been autographed on the front by Warren Beatty.............BOTH PHOTO AND AUTOGRAPH ARE IN VERY GOOD CONDITION. 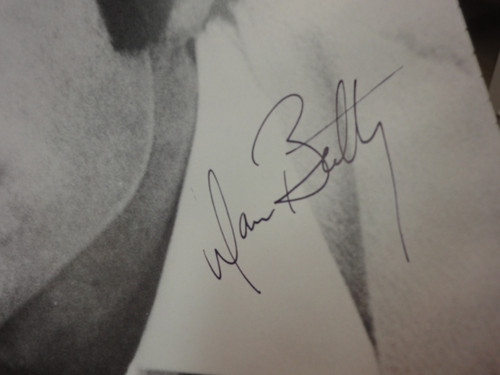