This item is a 7" X 7",black and white lithograph photo of Ted Bessell.After five years of playing uptight Donald Hollinger, the boyfriend of Marlo Thomas in her groundbreaking proto-feminist sitcom That Girl for five years, Ted Bessell as an actor was hopelessly typecast as the perennial second fiddle. This was a shame for despite the bland image he projected on the show, he was a vital, creative, talented, and passionate man who excelled at painting, music, directing, and acting. A native of Flushing, NY, Bessell was a piano prodigy and at age 12 performed a recital at Carnegie Hall. By the time he graduated from college in 1958, he had decided to become an actor and launched his career in 1961, playing an elevator operator in the feature film Lover Come Back. The following year he was cast as a college student on the series It's a Man's World. The series only lasted a season and Bessell went on to become a semi-regular on Gomer Pyle, U.S.M.C. in 1966, the year That Girl went into production. Though the role of Donald made Bessell a television star, the actor stated that the role "took away the heart of me." During its run, he also played small roles in a few feature films, including Don't Drink the Water (1969). Following the end of the series, Bessell starred opposite a chimpanzee in the short-lived Me and the Chimp (1972) in which he played an uptight dentist/father of two forced to contend with the tame ape his children found abandoned in a park one day. The '70s were a slow time for him -- but for a few memorable appearances as the boyfriend of Mary Tyler Moore on her proto-feminist sitcom -- and he only appeared in a couple of films. The '80s continued in a similar vein, but included two unsuccessful attempts at TV sitcoms: Good Time Harry (1980) and Hail to the Chief (1985) in which he played Patty Duke's husband. By the late '80s, Bessell had largely abandoned acting and become a television director. In 1989, he shared an Emmy for directing an episode of Fox television's Tracey Ullman. In early October 1996, Bessell had just reunited with Marlo Thomas to present at the Emmys and was discussing a That Girl reunion movie with her. He was also busy preparing to direct a feature-film version of the '60s sitcom Bewitched (produced by himself and Penny Marshall through their jointly owned Parkway Productions, which they established in 1991) when he was felled by a fatal aortal aneurysm. The lithograph photo has been autographed on the front by Ted Bessell.The lithograph photo has been autographed on the front by Ted Bessell....BOTH PHOTO AND AUTOGRAPH ARE IN VERY GOOD CONDITION. 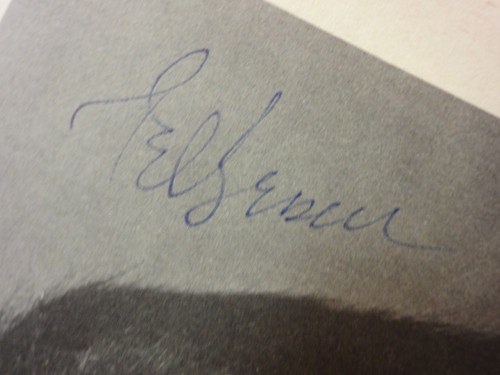