Samuel Beckett-"Molloy"-1970-Grove Pres-5" X 8"-241 pages-Hardcover Book-With Jacket-Signed By Author.Samuel Beckett was awarded the Nobel Prize in Literature in 1969 for a body of work that includes novels, essays, poems and plays. His best-known play, Waiting for Godot (1953) is a comic study of philosophical uncertainty, and, like much of his work, focuses on the absurdity of human existence. Beckett graduated from Dublin's Trinity College in 1927 and settled in Paris, where he worked with James Joyce and published short stories and the novel Murphy (1938). During World War II he joined the French Resistance and was eventually forced to leave Paris, but after the war he returned and wrote most of his important works (in French), including the prose trilogy Molloy (1951), Malone Dies (Malone Meurt, 1951) and The Unnamable (L'Innommable, 1953), and the play Endgame (Fin de Partie, 1957). Never exactly mainstream, Beckett is nonetheless considered one of the most important European writers of the 20th century for his influence on modern literature and for his ability to impress, shock and confound.A hand signed cut signature by Samuel Beckett with a fountain pen in black has been affixed to the title page of the book. The cut signature portion is approximately 1" X 2 1/2"...........BOTH BOOK AND AUTOGRAPH ARE IN VERY GOOD CONDITION. 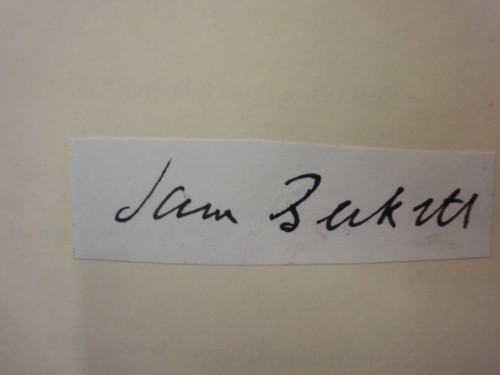