Bernard Malamud-"The Fixer"-1966-Farrar Strauss & Giroux-6" X 9"-335 pages-Hardcover Book-With Jacket-Signed By Author. Bernard Malamud (April 26, 1914 – March 18, 1986) was an American novelist and short story writer. Along with Saul Bellow, Joseph Heller, and Philip Roth, he was one of the best known American Jewish authors of the 20th century. His baseball novel, The Natural, was adapted into a 1984 film starring Robert Redford. His 1966 novel The Fixer (also filmed), about antisemitism in the Russian Empire, won both the National Book Award and the Pulitzer Prize.....................The Fixer is a novel by Bernard Malamud published in 1966 by Farrar, Straus & Giroux. It won the U.S. National Book Award for Fiction (his second) and the Pulitzer Prize for Fiction.The Fixer provides a fictionalized version of the Beilis case. Menahem Mendel Beilis was a Jew unjustly imprisoned in Tsarist Russia. The "Beilis trial" of 1913 caused an international uproar and Beilis was acquitted by a jury. The book was adapted into a 1968 film of the same name starring Alan Bates (Yakov Bok) who received an Oscar nomination. The book has been autographed on the title page by Bernard Malamud..............BOTH BOOK AND AUTOGRAPH ARE IN EXCELLENT CONDITION. 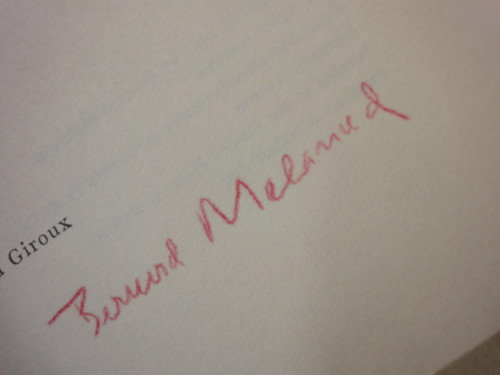