This item is a 7" X 10", black and white early photo of actress Ingrid Berrgman. The back of the photo features a biography of the actress. Ingrid Bergman (29 August 1915 – 29 August 1982) was a Swedish actress who starred in a variety of European and American films, television movies, and plays. With a career spanning five decades, she is often regarded as one of the most influential screen figures in cinematic history. She won numerous accolades, including three Academy Awards, two Primetime Emmy Awards, a Tony Award, four Golden Globe Awards, and a BAFTA Award. She is one of only three actresses to have received three acting Academy Awards (only Katharine Hepburn has four). The photo has been autographed on the front by Ingrid Bergman...................BOTH PHOTO AND AUTOGRAPH ARE IN EXCELLENT CONDITION. 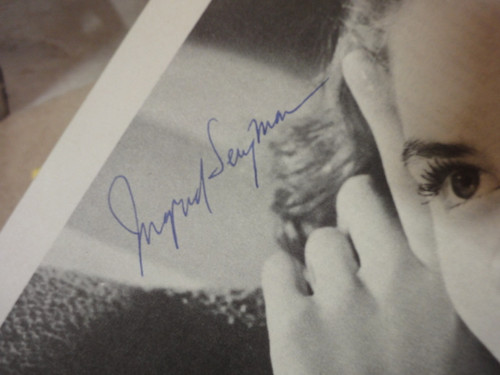