Ben Gurion, David Prime Minister "Days Of David"-1967-Grossman Pub-8 1/2" X 12"-157 pages-Hardcover Book-With Jacket-With Photos- Signed By Author. One of the most influential leaders of Zionism, David Ben-Gurion declared Israel an independent state in 1948 and served as the first Prime Minister and Defense Minister. Born and raised in Poland, he emigrated to what was then part of Turkish Palestine in 1906 and became active in the Zionist movement, gaining fame for his vision, energy and sharp oratory. During World War I Ben-Gurion lived in the United States, but most of his adult life was spent in Palestine and Israel as a military and political leader. After serving as Israel's first Prime Minister he retired in 1953, but he re-entered politics and served as Prime Minister from 1955 until he voluntarily stepped down in 1963. After his last term as Prime Minister he remained active in Israelis politics until his retirement in 1970.The book has been autographed on the title page by Ben Gurion. Please note that this book was signed near the end of David Ben Gurion's life so there are tremors in his signature............................BOTH BOOK AND AUTOGRAPH ARE IN VERY GOOD CONDITION. 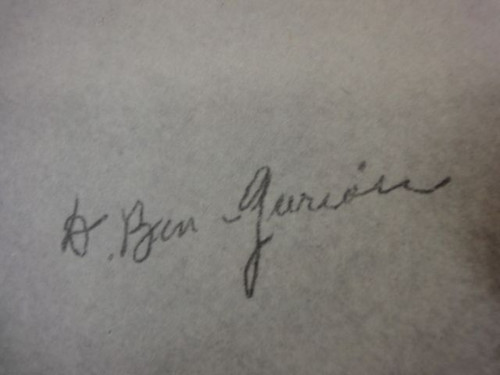