THIS IS AN AUTHENTICALLY AUTOGRAPHED LP BY MILTON BERLE.. MILTON BERLE(ROULETTE R 25018)SONGS MY MOTHER LOVED. PHOTO COVER IS SIGNED BY MILTON BERLE. TRACKS: SONGS MY MOTHER LOVED, ANNIVERSARY SONG, OH HOW I MISS YOU TONIGHT, I DON'T KNOW WHY, TRY A LITTLE TENDERNESS, IMAGINATION, TOGETHER, DEAR LITTLE BOY OF MINE, IF YOU WERE THE ONLY GIRL, TILL WE MEET AGAIN, I'D GIVE A MILLION TOMORROWS, NEAR YOU. CONDITION OF THE VINYL,COVER, AND AUTOGRAPH IS VG. Milton Berlinger (July 12, 1908 - March 27, 2002) was an Emmy-winning American comedian and actor. As the manic host of NBC's Texaco Star Theater from (1948-1955), he was the first major star of television and as such became known as Uncle Miltie or Mr. Television to millions during TV's golden age. 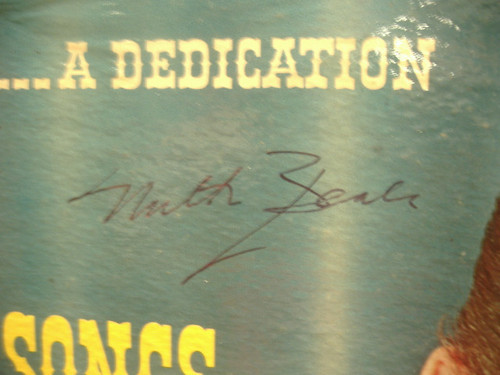