Menachem Begin-"White Nights-The Story Of A Prisoner In Russia"-1977-Harper & Row-5" X 8"-240 pages-Hardcover Book-With Jacket-First Edition-Signed By Author. Menachem Begin was prime minister of Israel from 1977-1983. Begin was born in Russia (like another future prime minister, Golda Meir), and he studied in Poland, where he joined Zionist forces to fight anti-Semitism. He moved to Palestine in 1940 and became the commander of the Irgun, a guerrilla force responsible for terrorist acts against Arab and British military and civilian posts. Elected to the Knesset in 1949, he represented conservatives for over two decades before becoming head of the Likud party in 1973. In 1977 he formed a coalition government and became prime minister. As such, Begin signed a historic peace treaty with Egypt in 1979 -- the so-called Camp David accords, brokered by U.S. President Jimmy Carter. Begin shared the Nobel Prize with Egyptian leader Anwar Sadat. But later he was criticized for the 1982 invasion and occupation of Lebanon (led by Ariel Sharon). Begin resigned as prime minister in 1983, and lived in relative seclusion until his death nine years later. This book-"White Nights"-has been signed by Menachem Begin to a smartly mounted signature slip on the title page of the book. The signature slip measures approximately 1" X 2"..............................BOTH BOOK AND AUTOGRAPH ARE IN VERY GOOD CONDITION. 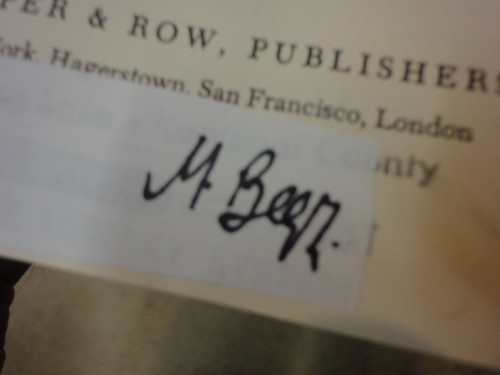