This item is an 8" X 12",black and white lithograph photo of actor John Beal. The lithograph photo features John Beal in a scene from the 1957 United Artists Movie-"The Vampire". The photo has been mounted on an 8" X 12" piece of construction paper.Small-town doctor Paul Beecher (John Beal) is given some strange pills by a dying elderly researcher. Later, when Paul gets a severe headache, his young daughter accidentally gives him the mystery pills. He's later puzzled by a series of strange deaths in which all the blood was drained from the bodies of the victims and then discovers the old researcher was working on a project involving vampire bats. The horrified Paul gradually begins to suspect that he himself is the killer. This adequate low-budget film combines science fiction with the classic vampire myth without advancing either very much. But the dialog is above average, and the cast is notably good for a film on this budget level, particularly lead actor Beal, and James Griffith as a very unusual visitor.The lithograph photo has been autographed on the front by John Beal with a fountain pen in black..................BOTH LITHOGRAPH PHOTO AND AUTOGRAPH ARE IN VERY GOOD CONDITION................... 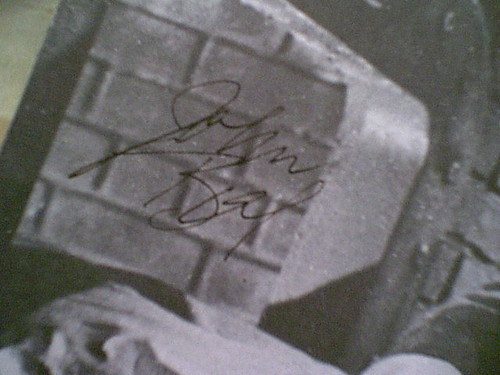