Irving Berlin-"Now It Can Be Told"-1938-Irving Berlin-sheet music.Tunes like "Alexander's Ragtime Band," "Puttin' On The Ritz," "God Bless America" and "White Christmas" made Irving Berlin one of the most celebrated composers of 20th century America. The son of Russian immigrants who settled in New York City, Berlin did not know how to read music, but he earned money by singing and plinking tunes out on the black keys of pianos. By the time he died at the age of 101, many of his songs had become part of American culture, especially those that came from his musical plays or movie scores. His stage productions included This Is the Army and Annie Get Your Gun (the musical that made Ethel Merman a star), and among the movies he scored were the Marx Brothers' The Cocoanuts (1929), Fred Astaire's Top Hat (1935), Holiday Inn (1942, with Astaire and Bing Crosby) and Easter Parade (1948, again with Astaire plus Judy Garland).The sheet music has been autographed on the front cover by Irving Berlin with a fountain pen in faded black ink............BOTH SHEET MUSIC AND AUTOGRAPH ARE IN VERY GOOD CONDITION. 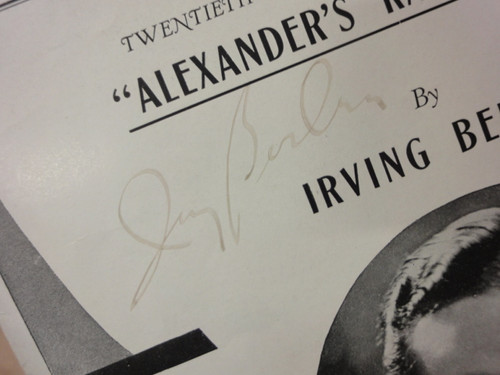