Sergeant Irving Berlin-"Goodbye France (You'll Never Be Forgotten By The USA)"-1918-8 1/2" X 10"-Waterson Berlin-sheet music. This World War I song was written and composed by Irving Berlin.The cover of this antique sheet music has a great World War I scene.Irving Berlin (IPA: /??rv?? ?b?rl?n/) (May 11, 1888  September 22, 1989) was an American composer and lyricist, and one of the most prolific American songwriters in history. Berlin was one of the few Tin Pan Alley/Broadway songwriters who wrote both lyrics and music for his songs. Although he never learned to read music beyond a rudimentary level, with the help of various uncredited musical assistants or collaborators, he eventually composed over 3,000 songs, many of which (e.g. "God Bless America," "White Christmas," "Anything You Can Do," "There's No Business Like Show Business") left an indelible mark on American music and culture. In addition to his individual songs, he also composed 17 film scores and 21 Broadway scores.In 1917, during World War I, he entered the United States Army and staged a musical revue, Yip Yip Yaphank, while at Camp Upton in Yaphank, New York. Billed as "a military mess cooked up by the boys of Camp Upton," the cast of the show consisted of 350 members of the armed forces. The revue was a patriotic tribute to the United States Army, and Berlin composed a song entitled "God Bless America" for the show, but decided against using it. When it was released years later, "God Bless America" proved so popular that suggestions were made that it should become the National Anthem. It remains to this day one of his most successful songs and one of the most widely-known in the United States. A particularly famous rendition occurred after the terrorist attacks of September 11, 2001, when members of the United States Congress stood together on the steps of the United States Capitol and sang Berlin's song.[5] Some songs from the Yaphank revue were later included in the 1943 movie This Is the Army featuring other Berlin songs, including the famous title piece, as well as a rendition of "God Bless America" by Kate Smith. Berlin himself sang "Oh, How I Hate to Get Up in the Morning". His natural singing voice was so soft that the recording volume had to be increased significantly in order to record acceptably.The sheet music has been autographed on the front cover by Irving Berlin with a black fountain pen.........BOTH SHEET MUSIC AND AUTOGRAPH ARE IN USED CONDITION.AUTOGRAPH IS FADED................ 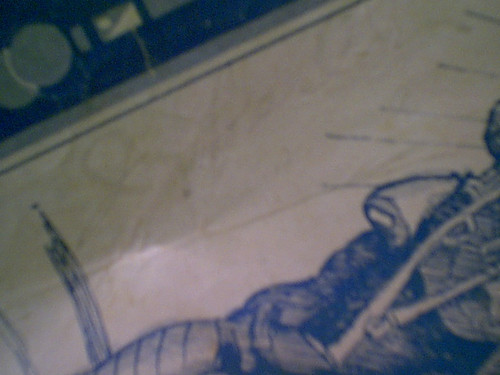