"As Long As I Live"-1944-M. Witmark & Sons-sheet music. Saratoga Trunk is a 1945 American drama romance western film directed by Sam Wood and starring Gary Cooper, Ingrid Bergman, and Flora Robson. Written by Casey Robinson, and based on the novel Saratoga Trunk by Edna Ferber, the film is about a Texas gambler and the daughter of a Creole aristocrat and his beautiful mistress. They become lovers and work together to seek justice from a society that has ruined their parents and rejected them. Ethel Waters and Lena Horne were both considered for the role of Angelique, the Haitian maid. Instead of a woman of color, Warner Bros. cast British actress Flora Robson in dark makeup. This was unusual, as by this time, the use of what was essentially blackface was considered inappropriate and offensive. Robson was nominated for an Academy Award for Best Supporting Actress. Shot in 1943, the film was not released until 1945.The film was Warner Bros.' most popular movie of 1946. According to Warner Bros. records, it earned rentals of $5,148,000 in the U.S. and $2,653,000 elsewhere. According to Variety, the film earned $4,250,000 in theatrical rentals through its North American release. The sheet music has been autographed on the front cover by Ingrid Bergman and Gary Cooper............. BOTH SHEET MUSIC AND AUTOGRAPHS ARE IN VERY GOOD CONDITION 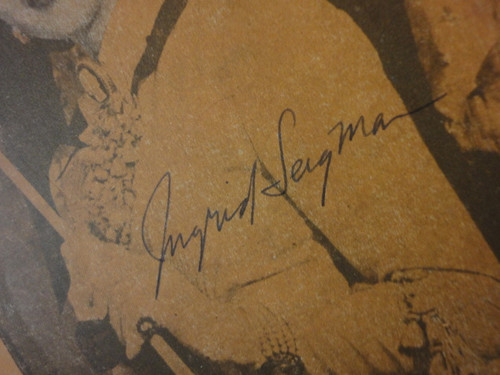